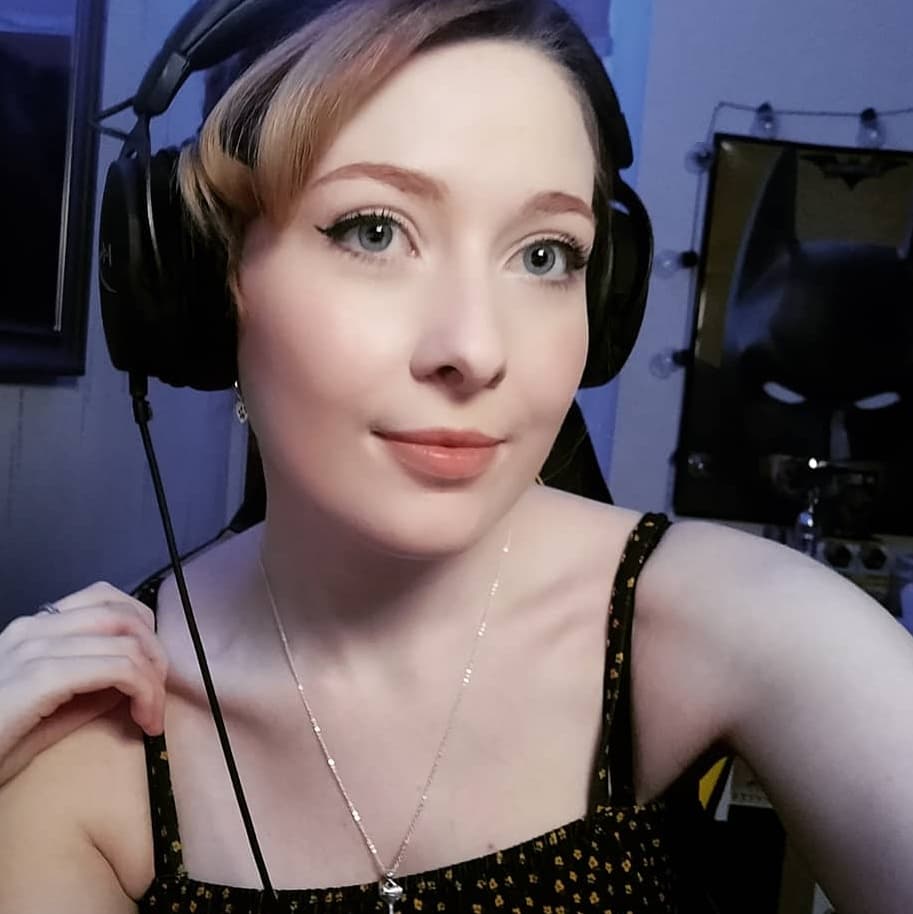 I did most of my gaming growing up on my Nintendo or PSP, I remember being obsessed with Frogger and it brought myself and my mum together often as we would both play and compete to finish the story first. It was our bonding time after school and work, we’d just sit and play and it became a very special routine for a while. I mostly played games with my sister growing up, we often played Mario Kart, Animal Crossing and Super Mario Bros together on the Nintendo DS or the Wii Sport. We don’t play games together anymore as I’ve converted to PC gaming and she no longer has the time.

My “gaming name” originated from old usernames I had. I’ve always had “Batman” somewhere in my usernames as I’m a massive DC comics nerd, but this one is merged with my nickname Kit Kat from my childhood. I was told by a friend in college that “kit” was “kitto” in Japanese and I thought it was really cute so I became Batkitto!

Honestly my “passion” for gaming was sparked by my experience online. I was gaming while growing up but after using Twitch and meeting friends on there I saved up for my own PC to join in on the fun and it was a whole different experience! I feel like that’s when I really became passionate about it.

I was studying art at college and my mental health wasn’t the best, I was finding it difficult to make close friends and old hobbies of mine became distant. I started playing online games on my PS4 and found a community of streamers and gamers on Discord. It was a server for artists, gamers, streamers and viewers to get together and make friends! I wanted to start doing art commissions for streamer friends and we often played Apex and such together, but eventually I decided to try out streaming myself. I got a job during the summer and saved up to build my very first PC and started in September/October of 2019 as Batkitto, it was the greatest thing I’ve ever done.

My community is incredible and a lot of us hang out outside of streams playing games together in Discord! It’s great getting to know everyone better and it’s also heartwarming to see everyone becoming friends and talking to each other daily on our server.

I stream a variety of games on my channel, from games that I love to games that my community recommends/suggests to me. I’m always up for trying new things and it’s been refreshing to complete games that have been introduced to me by friends. My favorite games are the Batman Arkham Series but recently I’ve fallen in love with Vampyr, Soulsborne, Detroit: Become Human, God of War and Star Wars Jedi Fallen Order!

I think if I didn’t stream I would play games a lot less than I do, but as I’m studying game design at university it would still be a big part of my life, personally I think I would probably play less story-driven single player games and more multiplayer with friends.

What you see on my streams is pretty much just how I am in general. I started streaming with the idea that, in my free time, I’d play games with new friends I made and make more through Twitch. I never considered I would be where I am right now and I believe I got here because I stayed true to myself.

I grew my channel through making friends. I always saw people online talking about how “networking” is important (it is) but it’s not about following people and expecting them to follow back or talking to them so they interact with you too. It’s about establishing real and genuine friendships with people. I’ve always loved making friends, it’s exciting meeting someone who has the same thoughts as you and enjoys the same games/movies/shows.

I never really tried “methods” for growth, I just did my own thing and played games I enjoyed which is exactly what I would recommend to any new streamer. Make the experience enjoyable and don’t go in expecting to get somewhere. Some challenges I’ve faced so far are mostly mental health related. I’m very open about my struggles and anxiety is something that has burdened me throughout my whole life. I often stress myself out worrying about things that aren’t important, view count and “who hates me?” are the main ones that I see everyone relating to. I wouldn’t say I’ve really overcome these obstacles as I still struggle to this day but it’s important to remember that the people who support you and stand by you are the important ones. Turn off your view count while streaming and block those after-stream emails that share your stats because they won’t help in how you’re feeling.

I reached affiliate fairly quickly when I started but I find most people struggle with the “average 3 viewers” requirement. I played with friends who also kept my stream up so the average in the beginning wasn’t a hurdle for me, and I’d recommend to anyone that when you’re starting out ask a few friends to have your stream up for that extra bit of support! I reached partner recently and I’ve been streaming for about a year and a few months now. It’s a massive achievement and it’s still so surreal to me.

I’m not yet a full-time streamer as I go to university outside of streaming, but I would love to make that a goal in the future! Getting partner feels like the start of my next journey and I want to work towards growing my channel further before I go full-time but it’s definitely something I’d love to do. This is my passion and I dedicate everything I have to it so it would be nice to have it as my main focus.

Balancing streaming and life in general is very difficult in my experience, I’ve still yet to find a perfect balance. I tend to take my days off to visit family and spend time with my partner, take my dog to her favorite places, etc. My post-stream process is pretty much getting food in me and jumping into Discord to play more games with my community. Sometimes I dedicate that time to doing university work but I find it very hard to focus after a stream especially since I end quite late.

I’m an anxious person in general, I was diagnosed with a generalized anxiety disorder when I was 15 and I was really bad with social interaction growing up, however, I do find it much easier now as a streamer. I think streaming has helped a lot in bringing me out of my shell and being able to interact with people even face-to-face, it’s not something I worry about now but I do still get flustered sometimes depending on who I’m talking to of course, strangers can still be quite intimidating!

When my mum found out about my streams she was excited to see what they looked like and even created a Twitch account to drop by without my knowledge, it was hilarious when she finally told me. I always saw her name pop up when people were gifting subs but I didn’t click on who it was and finally she mentioned it, she’s a big supporter of my streams and drops by whenever she’s able to talk in chat and my community gets along with her well!

I’d love to stream for the rest of my life, honestly. It’s my passion and it makes me very happy, it’s something I can see myself doing for years to come and I hope that I’m able to.

I use Streamlabs OBS, StreamElements and Streamlabs Chatbot to run my streams. StreamElements is a software I’ve only just started using for labels on the screen like sub goals and such, it just looks much neater in my opinion.

I have a Discord server where we all hang out before and after streams. It’s a lovely experience and I’d recommend anyone to create a server to keep in touch with people when you’re not live! It’s also a good place to post your schedules and announcements to keep everyone up to date instead of relying on social media like twitter and instagram, not everyone has those.

I made all of my overlays and I like to keep things very minimal, I’m not a fan of too much going on and I think as long as you can see the streamer (if they want to use cam) and the game then that’s the perfect layout. An extension I’d recommend using is captions for those who are hard of hearing! Having captions on the screen allows people to read subtitles and welcomes a wider range of people too.

I do often look at analytics although I find it just makes me anxious. It’s normal to have slow days where you have less viewers or chatters etc but as a streamer we panic thinking we did something wrong. I’d recommend not looking too much at your analytics and just enjoying your experience, if you’d like feedback just ask your community for some! If I’m stuck on what game to play next I often put up polls in streams or in discord to ask what the community would prefer to see next.

Don’t set your heart solely on reaching partner, there’s so much more you can do with your channel too! I believe everyone can reach that, but everyone’s journey is different and you shouldn’t compare yourself to others. Be yourself, stream content YOU enjoy, turn off that darn viewer count! These are all things I wish I could go back and say to myself because the journey can be stressful, just make sure you don’t push yourself too hard to the point where you stop enjoying it.

There’s a few things I would change personally but nothing can be perfect. I’ve recently seen an add on where users can input their pronouns alongside their username which I think is very helpful for streamers. I think making Twitch a more welcoming platform for EVERYONE is important.