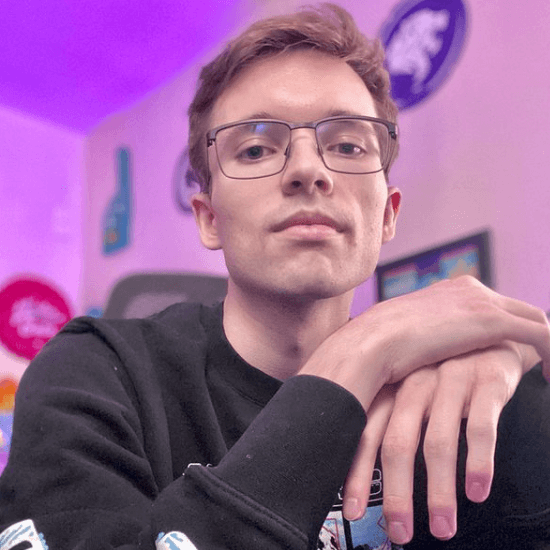 I started playing video games when I was probably around 7 or so, playing Pokémon sapphire and some other random games on a gameboy. I have a bunch of memories specifically going to my friend's house when we were younger, and playing Pokémon with him and his sister.

Pokémon itself was such a huge part of my childhood, from the cards and games being so popular. I always was in after school care or summer camps growing up because of my parents working, and connecting with other kids through Pokémon was huge for me. I think that love for the game, even though it was just one franchise, really cemented my love in gaming.

Another huge thing that I think was a big cause was actually my Dad. He wasn’t a big gamer or anything, but when I was like 9-12, sometimes he would be up after I went to bed playing games like James Bond or Fallout 3/New Vegas, and if I got up in the middle of the night I would see him playing at different points. Even though I was young, he would let me stay up sometimes for like 5-10 minutes to see what he was doing, and to this day the Fallout franchise is one of my favorite series because of this.

I’ve had quite the long journey to get to where I am today, and I think it’s probably better to start with YouTube. When I was starting out as a freshman in high school, my best friend at the time started a Minecraft YouTube channel, and wanted me to make one too, and I thought why not. I put an INSANE amount of time into that first channel, uploading over 250 videos in 6 months. I never got more than around 125 subscribers, but I fell in love with content creation.

Over the years, I made a bunch of different YouTube channels all focusing on Minecraft, and didn’t really do much on Twitch, but slowly but surely I moved over. I started getting really into Overwatch, and it felt like a game that made a lot more sense to stream, so I started putting my time into streaming moreso than YouTube, and I LOVED it. Twitch allowed me more interaction with people who watched me, and with how much content I wanted to produce I was more than okay streaming for countless hours straight, it was amazing.

This was all WAYYY before I created the Couriway persona, but streaming became my main hobby as I worked full-time as a designer in 2019. As I continued to pursue design as a career in esports and live what I thought was my dream at the time, I was streaming to around 10-20 people almost daily, I really focused on having a consistent stream schedule because of how much I loved it. Twitch at this point was never a job or really any type of source of income, and I was more than okay with that.

I like to think of Couriway as the culmination of everything I’ve been working towards since 2013, and my time finally just came. When I first came up with the name, I made a sign that says “Do it for….” at the top and then underneath is the names of every single channel I’ve ever had on Twitch or YouTube, which is close to 20. Every channel taught me something and was special to me in their own way, and the best part about doing this now is how proud the younger version of myself would be for really making this a reality.

The reason for my growth is a mix of 2 things. I’m a former world record holder for multiple different Minecraft speedrunning categories, and I began to create content on YouTube that other people simply weren’t making in regards to Minecraft speedrunning, and was able to capitalize on that into a streaming audience. My YouTube is for more scripted speedruns and educational content, while my stream is almost strictly world record attempt speedruns.

I absolutely LOVE what I’m doing currently, as I was already just speedrunning the game in my free time, but streaming it live allowed for other people to learn the game themselves which is really cool to see. I’ve had so many people tell me how my content has helped them improve and get personal best times, and that’s the most rewarding part to me, to truly be able to build up a part of a community in a game I love so much.

While Couriway is a brand name, and I don’t like going by my real name, I act almost exactly as my true self on stream. I think it’s really hard to find success if you aren’t able to show people the raw passion for what you’re doing. I knew when creating this name/account, I wanted to make something that was personal to me, as this was going to be the last name I would ever go with. I came up with Couriway, a town in Pokemon X & Y, as that game was extremely special to me growing up, and has a great quote as an easter egg on the back of a train bench.

"To the person reading this: What are you like now? Did you become who you wanted to be? For starters, what was the person you wanted to become even like? I don't know, but it would be wonderful if you can boast that you're living each day to the fullest. To future Sycamore. From the Sycamore dreaming of the future."

This really resonated with me and is basically how I’ve always tried to live my life, so it all felt more than fitting (major plus that Couriway was available as a username on both Minecraft AND Twitch though).

I was streaming for a bit in August, but had to stop due to personal issues. However, I was still able to build the biggest audience I had ever had streaming up until that point, averaging near 50 viewers, which I thought was insane. I had just started, and was over doubling my average viewer count for years? I couldn’t process it. Fast forward to when I actually started going full force with this around early-mid January, going from normally 10-20, to 50 for a month, almost instantly to 2k and now 3k has been beyond insane. The growth has been so hard to process but I couldn’t be happier, I applied for Partner once I streamed 12 days in a row and got it in 4 days, something that I still cannot believe, as it was a dream of mine for so long to have a checkmark and to get it almost instantly now, it’s been unreal. I’m cautiously optimistic about this being a full-time thing, but will have to see if I can really keep up an audience this size for months, but the early results are more than I could ever expect.

Honestly at the moment, it’s something that I’m going to need to learn how to do better. I stream daily for around 6 hours a day, starting at 11am EST. I usually wake up around 9:30am, shower and eat, and check my emails for a bit before actually starting the stream. After the stream I usually have a meeting or 2 a week, but most of the time I work on YouTube videos. However, every night I make sure that I have enough time to hang out with my girlfriend, that’s the one thing I know how to balance and she’s incredibly important to me, I wouldn’t have committed to doing this without her support.

I hope to keep streaming as long as possible, I love content creation and hope to do this for several more years at least. I’m not too worried about burnout as I’ve been lucky enough to never really feel burnout, so every day is just as exciting as the last. I think once this feels more consistent and sustainable, I’ll be able to balance real life a lot better.

Tell us what tools/apps/extensions you use for your stream

Streamlabs OBS handles most of my streaming stuff, I have about 10 different scenes for streaming that I use all the time. I just pop Twitch chat out to read everything, and have that along with Streamlabs, my point rewards, and notifications on my second monitor. My mod team is absolutely fantastic so the only bot I really need is Nightbot, just for a bunch of different commands, and my mods handle the rest. BTTV and FrankerfaceZ are essential as well, and I  recommend those to any new viewers to get the extensions to see everything. With my background of being a graphic designer, I made all of my graphics and overlays, except for my emotes, which I commissioned from various different artists.

Streamlabs OBS is easily the best thing I use for streaming, it’s super easy to customize and I’ve literally never had a problem, love it so much.

I really enjoy the light setup I have at the moment, it makes me feel super professional, so definitely my 2 studio lights along with my Nanoleafs that I keep purple to make the environment fit my vibe.

Finally water, I drink SO much water on stream, beyond important to stay hydrated while going at this 6 hours a day.

Never feel like what you’re working towards is hopeless. It took me 7 years, thousands of YouTube videos, almost 20 channels, dropping out of college, moving countless times and so much more to just get to where I am today, and now that I’m here it really does feel worth it. Do not give up, take every day as an experience and think about how you can always learn and plan for the future!

I think just more precise guidelines and more help with DMCA stuff with music now. I’m thankfully not too affected by this with my stream playlist, but I know a lot of streamers who have to worry about this more and it’s really unfair to them, I hope that there can be something to better protect creators that comes from Twitch in the future.