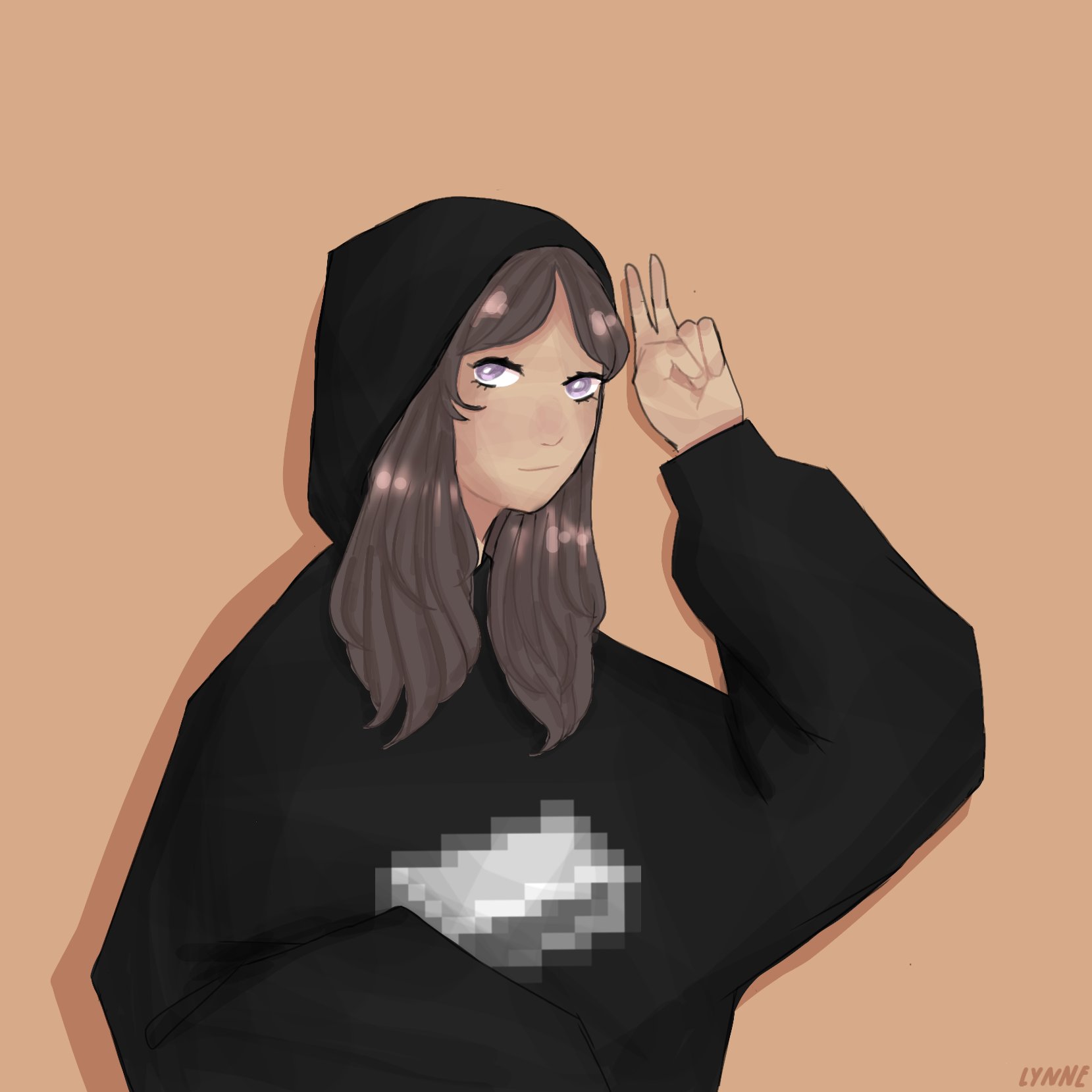 Amnesia: The Dark Descent was the first game I labelled a ‘favourite’ of mine. It’s a horror game, focusing almost entirely on creating a spooky atmosphere rather than focusing on varying uses of jump scares. I was introduced to it through PewDiePie, who was coincidentally the first creator I labelled a favourite and a major inspiration.

Growing up, I often played by myself. I’m the youngest of three kids in my family, and my hometown wasn’t big on updated technology, so we usually were outside rather than inside if any friends were going to be hanging out.

The name ‘FeRiley’ came about when my friend Akio and I were playing Minecraft together, and we had just decided I was going to start streaming. We originally thought of a fake name I could go by so that people from school didn’t find my channel, and then usernames to go with it. The ‘Fe’ refers to the Iron element on the periodic table, which we connected to needing iron ore in Minecraft to complete any aspect of the game.

While I was never too big on gaming, PewDiePie remained a creator I stayed updated with through the years. Almost every game I’ve enjoyed as I’ve grown up has been due to him making some form of series on it—such as The Last Of Us, Beyond: Two Souls, and Life Is Strange.

My college went into lockdown with 100% online schooling at the start of March. Because of this, my best friend Huntah suggested we start a Minecraft world to play on if we couldn’t see each other in real life. This was the first time I was reintroduced to the game since I was around twelve, and I’d completely forgotten how to play it. I was googling very basic things about the game, and because of this Minecraft videos began showing up in my YouTube recommendations, including Dream’s. Through those I found the Minecraft community and was sucked into watching all of the ‘bigger’ streamers’ content, until I eventually fell in love with the smaller creators’ content as well. I validated the idea of streaming by talking it through with my friends and being encouraged by them, thinking to myself that if I used a fake name and was faceless, anything that goes wrong I can erase and pretend it didn’t happen.

At the time, I would stream on an iMac with a cheap headset. I was only 17 and worked in a bakery; I didn’t have money to spend on a setup if it wasn’t going to go anywhere or if I gave up after a week or two. Thankfully, I loved streaming, and quickly built a community that encouraged me as much as my friends did, and I was able to save up for a real PC and gathered parts for a setup through Christmas wish lists.

My community is really funny and have definitely picked up on some portions of my sense of humour. They can be super sarcastic to me and each other, but you can always tell that they mean well. They’re an incredibly sweet group of people, and I’m always catching myself being super thankful I was able to build such a supportive community. A lot of my viewers I would genuinely consider friends, and I always feel comfortable to go into the Discord and joke around with them.

On stream, I mainly play Minecraft. I swap between SMPs, Hardcore, speed running, or well-known minigames such as Bedwars, but I do stay in the category of Minecraft. If I wasn’t streaming, I probably wouldn’t play it as much as I do. My favourite games are more in line with Beyond: Two Souls and Life Is Strange, but I’m hoping to introduce more content like that into my channel in the near future.

I didn’t really create a brand persona when trying to get ready to stream. I wanted to be comfortable when I stream, and I was happier with being my true self when live than a persona.

In terms of how I ‘obtained success’, I have never been able to give a clear answer. I was incredibly lucky. On my first stream, SkylarNyx raided me with 30+ viewers, which immediately gave me my three viewer average as a few of them stuck around for my future streams. I was then asked by chance to join an SMP called ‘Warp SMP’; a female streamer SMP with small creators, which quickly gained traction among the smaller parts of the Minecraft community. We were lucky enough to have streamer Celestia Vega be interested enough join, and on my first ever charity stream, Colin Smoke came onto the server for a few hours to joke around. I was in awe of both of these people, and I’m lucky enough to call them my friends now. By chance, I was raided by a few awesome creators with big audiences and gradually I just grew. I wouldn’t call myself a big channel, or that I’ve in any way ‘made it’ with what I have now, but I can recognize that I’ve been incredibly lucky with my trip so far.

Because of those instances, it took a week to reach Affiliate and around six months for Partner. I still don’t feel too secure in what I do to manage full-time streaming, and I don’t think I truly ever will, at least not in the foreseeable future. It’s just what I like to do as a fun hobby.

Achieving a healthy balance has been a difficult and long process, and I’m not really the best with it, but I’m definitely better than I was. Originally, I was juggling full-time school, a part-time job, and daily streams, but as streaming was the only of the three I was happy with, I begun focusing entirely on that. Fortunately, I managed to pass the year of school with above passes and maintain streaming, which took a lot of hard work.

As of January, I decided to drop out of year 12 and instead enroll into university a year early, and I now am working on a three year Creative Writing degree to hopefully work towards an editing career. To balance streaming, it’s 100% online and I can work on things during times as I see fit. My streaming schedule falls at midnight until 2am for my timezone, so being able to work on things whenever I need was an important factor we were looking for.

Because of beginning a stream at 12am, my pre-stream process is usually gathering as many energy drinks or coffee as I can to make it through, and after I finish I hop around to my friends’ streams, look through my discord, talk to my mods, update any social media or anything of the sort, until I’m usually going to sleep around 8am. It’s not the easiest, but I found streaming at that time was best for my channel and I owe a lot to it. It’s definitely not the most sustainable schedule I could’ve chosen, but now that I'm Partnered I have a lot of leeway to change things as I need, so if I need to take a break I can, or I can slowly shift my streaming times to fit into a normal schedule again. At the moment, however, it works nicely with what I have to do in a day!

I use Streamlabs OBS, but I’m starting to transition into OBS as all of my friends use it and I hear it’s a lot easier on the PC. At the moment though, everything from my bot to my donations are set up through Streamlabs. I don’t use any other tools or extensions other than what they give me to use.

Be yourself; it’s a lot easier to have fun and talk to your chat if you’re being true to your natural character.

It’s super important to have fun while you’re streaming! If you’re trying to reach Partner, then you’re most likely taking it more seriously than a casual hobby—and streaming daily when you’re not having fun is an easy way to burn yourself out and not be motivated.

Also, stay consistent with the times that you stream! It’ll be so much easier to form an audience if you stream at the same time, so they can expect you!

My biggest one that I swear by is to always be kind. Be kind to your chat, other streamers, and anybody online or in real life about what you do. Nobody will want to watch, or collaborate with, a creator who isn’t kind and takes things for granted. What you’re doing is awesome! Be happy about it, be thankful, be proud, be kind! This shouldn’t be a chore or something you feel negative about.

I love Twitch and I’m thankful for the platform it has given me, but I do wish they gave more opportunities to smaller streamers, especially ones having just hit affiliate or working towards it. Pushing small streamers more could really help motivate them to achieve bigger goals. This could include putting them onto more recommended, having a section dedicated towards small streamers, or even a tag.