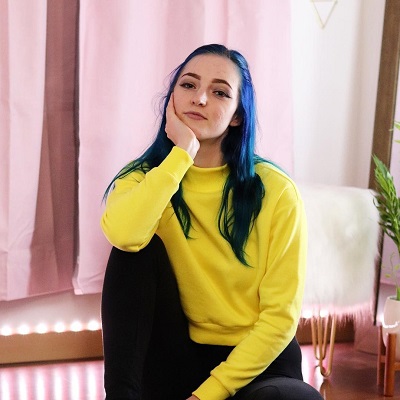 Littlesiha's journey to streaming was never anticipated. After 3 months of playing Just Dance, she qualified to compete at the Electronic Sports World Cup. She's now a 2-time US ESWC Champion. Littlesiha has since become a Twitch partner and spends time helping the GameChanger Charity, among other things. Read the full interview below!‍

Siha is a reference from Mass Effect 2 & 3 - if you romance Thane as female shepard, he calls you Siha, which is some kind of warrior angel from his culture. Siha is such a short name, so naturally, it wasn’t available anywhere. I just put “little” in front of it to make it available, and it’s always stuck.

I started streaming after I competed in Just Dance esports for the first time. I was flown to Paris Games Week to compete on a huge stage, and there was a Twitch booth set up to livestream all the competitions. After going home, I decided to check it out and I noticed that no one was really streaming Just Dance regularly. A few of my friends convinced me to try it, and here we are.

Is streaming your full-time job? What’s a typical day look like for you?

Streaming is indeed my full-time job and it keeps me mighty busy. A typical day is wake up, check & respond to emails, record videos, stream, edit videos, answer more emails - it never really ends, to be honest. I am basically on-call at all times, but I really love it. Before I started streaming full-time, I worked as live chat support for an ISP and I was super lucky to have a boss that helped me work around streaming.

I’m so lucky to have the community that I do. They’re funny, generous, and really kind to each other. We have an advice/vent section of our Discord and it’s full of so much love, they’re always there to help me and each other.

How did you end up in the Just Dance World Cup? What was the experience like?

I’ve been playing Just Dance since the first game came out - I got a Wii and the game for Christmas, and got them every year for my birthday. I never really tried to get better at dancing because I always made excuses as to why I couldn’t do it (I’m too old, I’m not cool enough, I’m not confident.) One day, I was scrolling through Facebook, and saw an ad for the Just Dance World Cup.

Basically, whoever scored the most points on their multiplayer during certain times at the end of 3 months would qualify and was flown to Paris to compete. I never thought I’d make it, but I wanted to try anyway. After the first session, I was pretty shocked to see that I was number one, so I kept competing until the end, when I qualified.

How did you get connected with GameChanger Charity?

I was asked if I wanted to compete for GameChanger during a Tiltify Charity Decathlon at TwitchCon 2016, which was basically a competition between 10 charities - the best performing charity took home a prize pool, but every charity went home with everything, anyway. After that, I took any opportunity I could to fundraise for them.

A few months ago, I got a call from them asking if I’d like to try streaming Just Dance on their new beta platform for kids in hospitals. The idea was they would send a bunch of tablets to random hospitals around America with a program on it where kids could make an account, watch videos, listen to music, and watch live streams where they can chat in real time.

I’ve been doing those streams once a week for the past few months and they have been the highlight of my days. Despite having the odds stacked against them, the kids are positive, kind, and super supportive.

I have 3 monitors - one for Just Dance, one for OBS & chat, and the other for my dashboard. I’m still working on the whole “cable management” thing, but honestly, the concept is lost on me.

What do you do when you’re not streaming? What are your hobbies?

I loooove playing video games on my own. As much as I love streaming, I love getting to play video games without feeling like I need to entertain. It feels so good to just wind down and chill.

The Mass Effect series totally has my heart, Crash Bandicoot was a huge part of my childhood, and I lost track of time so often playing Skyrim. They’re all incredible games.

For my birthday, GameChanger sent me a card and told me to only read it on stream. I did, and it stated that they’d be giving a child a college scholarship in my name. It was one of the sweetest things I’ve ever been lucky to be a part of, and pretty much everyone was crying.

Very early on, before I got partnered, being chosen as a Ubisoft Star Player was insane to me. Their Star Player program is where they choose several influencers from each game, fly them to E3 and they get total VIP treatment.

For the next year or so, they send all of Ubisoft’s new games. It opened so many doors for me.Recently, I would say it’s raising money for charity. Last year, we raised about $15K. I’m hoping to raise much more than that this year.

Do you have a favorite streamer? If so, who?

She doesn’t stream much anymore, but Omgitsfirefoxx was a huge inspiration for me as a streamer. Sonja taught me that being yourself is the only way to be - I don’t think I’d be the same streamer without her.

I’ll be here until it doesn’t make me happy anymore, but each year of streaming has made me happier than the last, so I don’t think that will stop anytime soon. :)