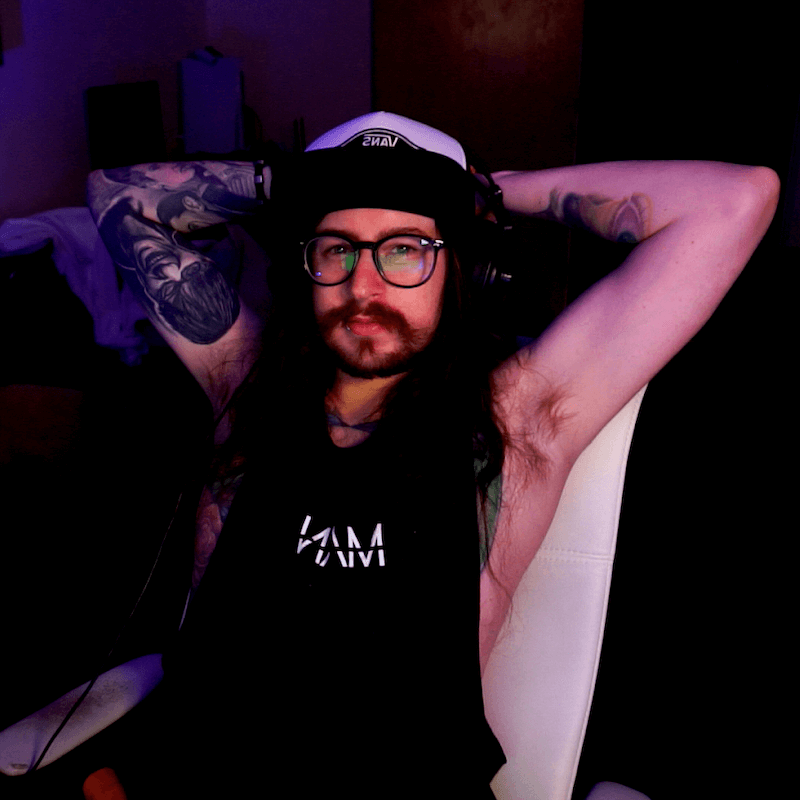 I started playing games back in the early 90s as a kid and they very quickly became one of my biggest hobbies and how I would spend most of my free time. I played the typical Pacman and Mario first, but Sonic the Hedgehog 2 specifically will always be the game that gave me the huge passion for video games, something about the speed and colours and soundtrack just really resonated with me. It was the first game that an in-game sound effect gave me fear, that dreaded “running out of air” sound was panic inducing as a kid! It was also the first game I ever completed fully by myself and I still go back to play it to this day.

My gaming name comes from a combination of a nickname that I’ve had for nearly 2 decades, Waltee, and the last name of a beloved Dethklok/Metalocalypse character named Toki Wartooth. Friends and mine back in the day used to love them and we all ended up with screen names because of it back then, but mine has stuck throughout the years.

If I’m being completely honest I kind of fell into streaming more than anything else. I had dabbled here and there over the years but never really took it seriously. It really started in March of 2020, I was working a mundane job in the head office for a large company and decided to start spending some free time messing around with coding and bots. I’ve always had a passion for technology, coding, and tweaking electronics and there was a homebrew scene involving pokémon where you could edit the RAM of the game to inject pokemon into the game that other people requested so you could trade them. It was a fun project to get involved with and it all kind of evolved from there.

Our community is honestly amazing and incredibly welcoming and helpful to anyone that’s around. We have people from all over the world and from all age groups too! We’re known as the Wonderful Weirdos, started as a bit of a joke just so I could call people weirdos, but we all know the weird and quirky people are the best and most interesting people to be around and it’s kind of stuck since!

Recently we’ve been streaming content for Animal Crossing and offer lots of items for people to come and pick up to help better their own personal islands as well as visiting other people’s creations and hosting competitions for special Discord roles and other fun prizes. We also dabble in other games, we’ve done pokémon in the past, Warzone, Guitar/Clone Hero and a few others. We’ll be pushing more variety content soon as well as I need an excuse to play some of the many games that I’ve been interested in playing but have been left on the side to collect dust so to speak, so what’s a better way to do that than to share that experience with the community!

If I’m being 100% honest I’d say that probably 80% of my success has come from being in the right place at the right time. Sure, I’ve worked hard to be where I am and have made some calculated risks, but it could easily have gone the other way if the timing was off, I’d like to say “follow these steps and you’ll see success”, and although there are obviously some things that you can do that give you a better chance of success, there’s no guaranteed method.

I think the biggest thing for me/my brand personally is to just be unapologetically true to who I am. You get what you see with me, other than tricking people into believing that I’m not incredibly socially awkward there are no surprises.

Biggest achievement/challenge? The biggest achievement so far is undoubtedly becoming a Twitch Partner. Honestly didn’t even expect to be accepted on the first application but I guess the Twitch Gods were looking down on me somewhere! It took me literally a week from the day I started streaming to become an Affiliate (March 2020, Friday 13th, unlucky for some). And a year later to that exact day I applied for Partner.

As for the biggest challenge, I guess the biggest thing for me wasn’t specifically related to the stream but more so lifestyle. In the summer of last year I lost my full time job during one of the peaks of the pandemic and I had to really fight with myself on whether to get back into looking for full-time work, look for part-time work or to go all in and take the stream more seriously. I went the stream route, and although there have been ups and downs and times where I thought about giving up the stream and going back to the “normal” daily grind of life, I’m still here!

Just to be true to yourself. There are decisions I could have easily made during the journey that would have been against who I am for some short-term gain, but I’ve stayed true to myself and it’s all worked out so far.

Honestly just the past couple of weeks I’ve had an influx of companies and people wanting to work with me for brand deals/sponsorships or offer me early access codes to games they’re working on. I’ve not taken on anything yet, but it’s still super interesting to see the opportunities that get offered.

To be 100 with everyone streaming has completely taken over my entire life the past year and I’ve struggled with finding the balance but I’m working on it. It probably doesn’t help that we’re still in a global pandemic, but I’ve streamed for 431 of the past 444 days and 10 of those were working on complete setup upgrades/upgrading and building watercooled PCs etc.

I’m easily sat at my desk for 14-18 hours a day (if any chair companies wanna sponsor me hit me up lol) either streaming or working on graphics/coding to improve the stream in some capacity.

Friends have been super supportive about it and my family have all said they’re not surprised that I’ve ended up with a career involving video games to some capacity as that’s always been a huge passion of mine.

OBS is king. The plugins that you can find and use on original OBS make way for so many cool things that I can’t recommend it enough.

Discord is used solidly throughout my day. It’s the hub for our community outside of the stream.

Liorenboard is another fantastic application that can be used to do some really cool effects, for example, I have it so my chat can redeem channel point rewards to change my scene between light or dark or colorful versions of the same overlays among other cool things.

As for bots, I use a combination of StreamElements to handle donations and a custom javascript bot that I’ve had help to create to do some specific things that I need.

My graphics are a combination of stuff that I’ve created and stuff that I’ve had members of our community offer to me. I’ve also been teaching myself Photoshop over the past month or so which I’ve used to create a bunch of emotes since making Partner and unlocking those extra emote slots.

2 things. The number one thing I’d say is to not focus too hard on numbers. The worst few months I had stress-wise were when I focused too hard on the numbers. Take them into account, but if you focus too heavily on them you’ll take all the enjoyment away. The second thing is use other platforms to bring people over to Twitch. The biggest growth I’ve seen on Twitch is when I’ve been using other platforms.

Discoverability 100%. You shouldn’t be forced to use other platforms to be discovered on Twitch.

Honestly to just enjoy the ride. Branch out if possible, continue to grow, collab with other people. Help bring some other people up. Just generally have fun with it all.

If I could maintain this as a career over the next 5-10 years that would be incredible, but if not, I’ll have a blast while I can!